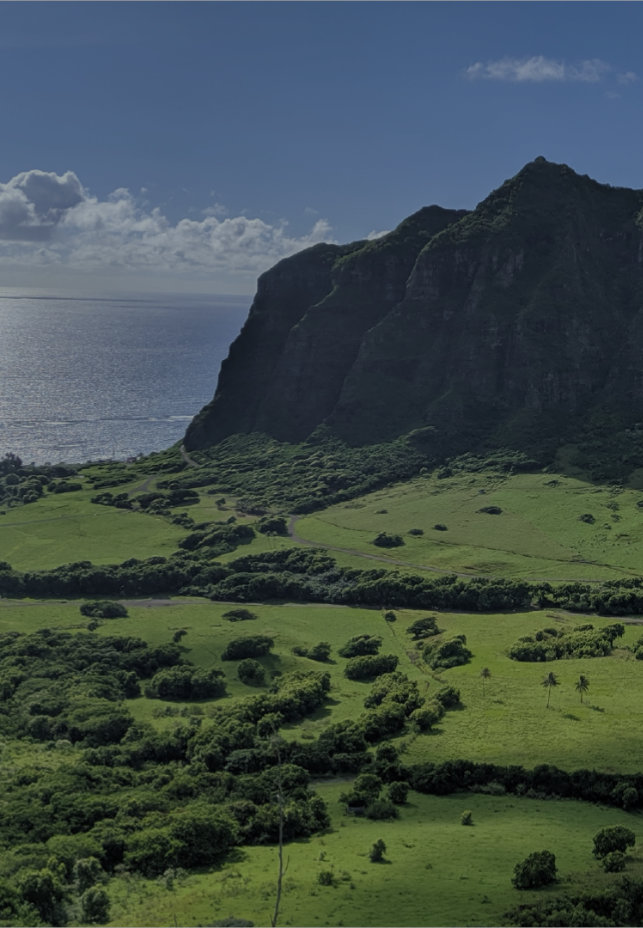 Welcome to our first Stewardship Bulletin! We aim to use this forum to share information about stewardship activities and priorities ongoing at Kualoa Ranch. We hope to instill a better understanding across all departments of the stewardship work performed here to fulfill our company vision. Lastly, we’ll be sharing facts and photos about native Hawaiian species (and some invader s too) found at Kualoa Ranch. Please feel free to share any bulletin feedback, or suggestions for future topics with us at any time. Through the months of May and June, snowy capped trees dapple the Koolau mountains. The delicate white flowers cover the canopies of the introduced albizia tree. Native to Indonesia and the Solomon Islands, about 140,000 of these trees valued for their quick growth, were planted for reforestation projects in the early 20th century in Hawai’i. At that time, little was understood about the potential impacts this tree could have on the Hawaiian ecosystem.
We now know the devastating impacts of these trees including:

Albizias are therefore one of stewardship’s top priority targets. Up to four times each month, staff head out to their respective valleys with a syringe full of herbicide slated for an injection into cuts made around targeted trees. This technique, called “hack and squirt” allows for resource managers like ourselves to kill massive, hard to reach trees with only a small amount of concentrated herbicide and hatchet. Within days, leaves begin to fall from the trees, and within weeks, only skeletons of the trees remain standing, leaving smirks on the faces of the Stewardship staff when they scan the hillside looking for that month’s targeted plants.
This flowering season, nearly all remaining mature trees have been identified across Kualoa Ranch property, and with so few left, the stewardship crew aims to hit as many as possible before they set fruit. While new seedlings will continue to arrive by seed dispersal (birds, pigs, wind, etc.), and will continue to pop up from the seedbank, eliminating all the mature trees seeding on the property is a major accomplishment in reducing future efforts spent controlling this target on the ranch. The stewardship crew is proud to be a part of addressing this statewide invasive species issue.

Standing at the base of the valley, trying to trace the ridge we were about to hike as it disappeared into the cloud covered peak, I get a brief moment of apprehension. We’re well prepared, our pack s bulging with equipment, food and water, and spiked hiking boots to aid in the steep slippery terrain. We’re facing a three-hour climb to the ridge before dropping into the valley floor. In the first mile alone, we’ll have to climb 1,700 ft.
Olona valley, which is preserved by Kualoa Ranch, is a hanging valley, flanked on two sides by steep ridges and a cliff face on the third. It is a difficult place to get to; a good thing from our stewardship standpoint as destructive pigs can only seldom make their way in. In 2004 the rare Cyanea truncata, or ha ha, was discovered in this valley. The Plant Extinction Prevention Program (PEPP) quickly fenced in a small area, encompassing the last three individuals known to exist in the wild. With this finding, the ranch enclosed an additional nine acres at a second location in the valley that protected an area that was suitable for the ha ha keiki to be out-planted.
The first smaller enclosure was our goal today. Setting off as early as possible, we took a moderate pace on the way up; frequently stopping to admire the view or marvel at the plant life around us.
As we gain altitude the distribution of plants changes from that of introduced and alien species dominated almost exclusively by Christmas berry and octopus tree to a native forest whose canopy, understory, and forest floor are a wonderous representation of the diversity of Hawai’i’s native flora. While it’s a beautiful sunny day for the rest of Kualoa, our views are soon obscured by damp misty clouds. At the highest point, the clouds break briefly, giving a stunning view of the valley below.
Descending now into hidden valley itself, we start traveling through uluhe (Dicronopter is linear is). Anyone with hiking experience in Hawai’i knows the perils this plant, one of the more prominent ferns of our native forests. While beautiful, uluhe poses many risks to the unwary. Sometimes growing in thickets taller than a man, it hides the ground making footing uncertain and sometimes treacherous. With our most experienced hikers in the lead, we cautiously make our way down. In some places ropes are left in place to ensure we can scramble our way back out.
Finally on the valley floor, we follow the streambed to the enclosure. Here, the native white hibiscus (Hibiscus arnottianus subsp. punaluuensis) towers over us growing as trees 30’ tall.
This, and the other native white hibiscus, H. waimeae, are the only known hibiscus to have fragrant flowers. We also pass a massive hapu’u fern (Cibotium sp.), easily 10’ tall. This endemic fern grows only one inch a year making this particular plant at least 120 years old! At the enclosure the original wild ha ha are gone but their keiki, out-planted by PEPP are healthy and thriving. The area is covered in Koster’s curse, a shrub that forms dense thickets crowding out other plants. Its berries are eaten by birds which then spread the seeds further. We only have an hour to work before it’s time to head back so we’re quick to stow our gear and get to it. Today is mostly a housekeeping trip. We take an informal inventory of what’s in the area, noting the olona (Touchardia latifolia), that the valley is named for along with many others such as ko piko (Psychotria sp.), ho ‘awa (Pittosporum sp.),and ha’iwale (Cyrtandra sp.). We’ve cleared as many weeds from the enclosure as we can. Too soon, it’s time to pack up but we’re already planning our next excursion up. A light rain begins to fall as the crew retraces their steps back out of the valley where the only sound is our own footfalls, and the steady rhythm of the rain on the leaves around us.

While many will think of ferns as plants with the classic fern shape shown below, the diversity of ferns is exemplified in the examples seen from the hike to Olona valley pictured on the right.
What is an Invasive Species?
In Hawai’i, invasive species can be identified as:

Why Control Invasive Species?
Hawai’i, born out of the sea by volcanic activity, is one of the most isolated island chains in the world. These unique characteristics, along with favorable and diverse growing conditions over millions of years, contributed to the evolution of more than 10,000 species that were found nowhere else in the world. These Hawaiian species also formed complex biological relationships in their environments, known as ecosystems. Comparitively, over 5,000 species have been introduced in the short time since human arrival on the islands. Hawaiian plants and animals and their ecosystems are significantly disrupted when numerous non-native species compete with native species, and interfere with established ecosystems.