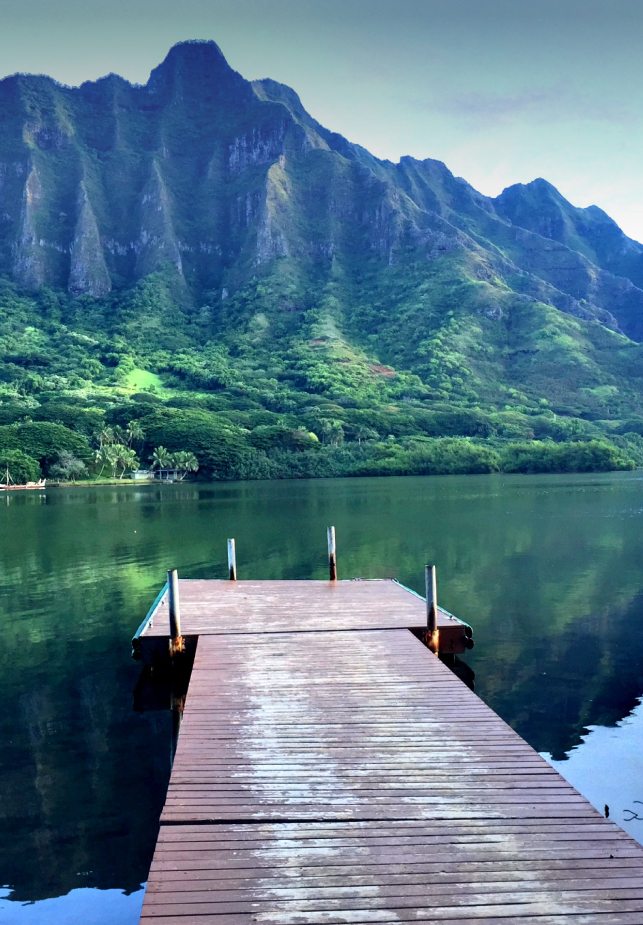 Question #9: What is that 50 foot tall fishhook in front of Kualoa stand for?

The fishhook that you see on the hill of the front pasture is an artistic representation of Manaiakalani. Manaiakalani is the name of the legendary hook that helped famed demi god Māuiakalana (Maui’s full name. Some say Māuiakamalo) fulfill some of his trickiest of tasks such as the pulling of the islands, the raising of Pōhaku o Kaua`i and the capturing of the sun to name a few. Manaiakalani is also the name of the astronomical star constellation that canoe navigators used. Although the world refers to that same constellation as “Scorpio”, Hawaiian navigators know it as Manaiakalani, some say Kamakaunuiomāui (The giant hook of Maui). Variations of the hook’s descriptions differs from island to island. Some say it was made out of wood, some sources suggest animal bone, and even fewer reveal that the hook was made from the bones of his ancestors. Wai`anae tradition states that the cordage used and is attached to the hook was braided from the hair of his grandmother. Regardless of sources and which you believe, Manaiakalani had the strength and ability unlike any fishhook owned by a Hawaiian Lawai`a (one who fishes). Our Native Polynesian cousins all share the stories of Maui and his magical hook with slight to variable renditions, nevertheless we [Polynesians] have a Māui[akalana]. Was he big and outlandish as Disney studios portray him to be? Probably not, remember that character is another artistic representation based on the suggestions and advise of their cultural advisors and writers. Māui[akalana] has the genealogical ties to the Wai`anae district. This proof is from Mo`olelo, Wahi Pana, and the Kumulipo. This mothers name is Hina[keahi]. His assumed father (based on the mother’s birth) is the rooster god Akalana. Elder brothers are Māuimua, Māuiwaena, Māuiki`iki`i. Māuiakalana is the youngest. In the cosmogenic genealogy of the Kumulipo, specifically on line # 2045 & 2046 makes reference to the final resting place of Māuiakalana to be in Hakipu`u at Kualoa. Before dying Māuiakalana throws his hook to the sky, creating the “Scorpio” constellation for all to use.

Question #10: So is Maui buried under that mound?

No. However that artistic representation reminds us of not only the historical contributions Māuiakalana brings to our culture through mo`olelo (ancient stories), it also prompts us to remember that Māuiakalana’s final resting place is Hakipu`u at Kualoa. Makes more sense the hook stand here rather than somewhere in Honolulu.