With not one, but two listings on the US Department of the Interior’s National Register of Historic Places since the 1970’s, Kualoa Ranch Private Nature Reserve is owned and managed by sixth generation descendants of Dr. Gerritt P. Judd. Kualoa’s mission is to enrich people’s lives by preserving Kualoa’s sacred lands and celebrating its history. Established in 1850, Kualoa’s company vision is to be a role model as stewards of these amazing 4000 acres named Kualoa, Hakipu’u and Ka’a’awa.  Our goal is to protect and enhance the natural beauty of these lands while developing sustainable recreational, agricultural and aquacultural enterprises that are compatible with the environment. All tours and commercial activities enable Kualoa to keep the lands undeveloped so that future generations will be able to enjoy them as well.  We truly care about and strive to educate all visitors … kama’aina, military and malihini … about traditional Hawaiian values, reverence for our natural environment, respect for the host Hawaiian culture and most importantly, the sacred history of Kualoa.

Today, Kualoa is a 4,000 acre Private Nature Reserve as well as a working cattle ranch with more than 600 head of cattle, 120 horses and 200 sheep, stretching from the steep mountain cliffs to the sparkling waters of Kaneohe Bay. Located on the eastern shores of O’ahu, Kualoa is just 24 miles from the hustle and bustle of Waikiki. The reserve terrain varies from waonahele … dense Hawaiian rainforest … to waokanaka… broad open valleys. It is truly a paradise for outdoor recreation and Kualoa offers guided tours by several forms of transportation … electric Mountain Bikes, ATV Raptors, Zipline, Horseback, Trolley, Bus, Boat, Jungle Jeep, Catamaran or your own two feet!

If the views look familiar, it’s because Kualoa has been the site of over 70 Hollywood movies since the 1950’s. Blockbuster films such as Jumanji, Kong Skull Island, Jurassic World, Jurassic World Fallen Kingdom, Jurassic Park, Windtalkers, Pearl Harbor, Godzilla, Tears of the Sun, and 50 First Dates have all been filmed at Kualoa. TV shows like Hawaii Five-O, Magnum P.I. and LOST have also used the amazing backdrops of . Kualoa is known as Hollywood’s “Hawaii’s Backlot,” and has been seen by more than a billion people in all the movies filmed at the ranch over the past 60 years!

There are two major areas of the property: the northern half which includes Kaʻaʻawa Valley, nick-named “Jurassic Valley” and containing many of the movie locations; and the southern half that includes the verdant Hakipuʻu Valley rainforest, Moli’i, an 800-year old ancient Hawaiian fishpond which is listed on the US National Register of Historic Places, and our Secret Island Hokule’a beach.

Kualoa is one of the most historically significant areas on Oʻahu, and in ancient times, it was one of the most sacred places on the island. Legends say Kualoa was once a pu’uhonua (place of refuge), where kanaka maoli (Hawaiian natives) could come to seek forgiveness. It was also used to host the Makahiki, an annual event where kanaka maoli came to train and participate in warrior games of skill.

Come experience the aloha and special sense of ʻohana (family) that the 400+ Kualoa employees share. Your patronage helps keep Kualoa Private Nature Reserve sustainable so that we can keep it undeveloped and preserved for future generations to enjoy and explore. 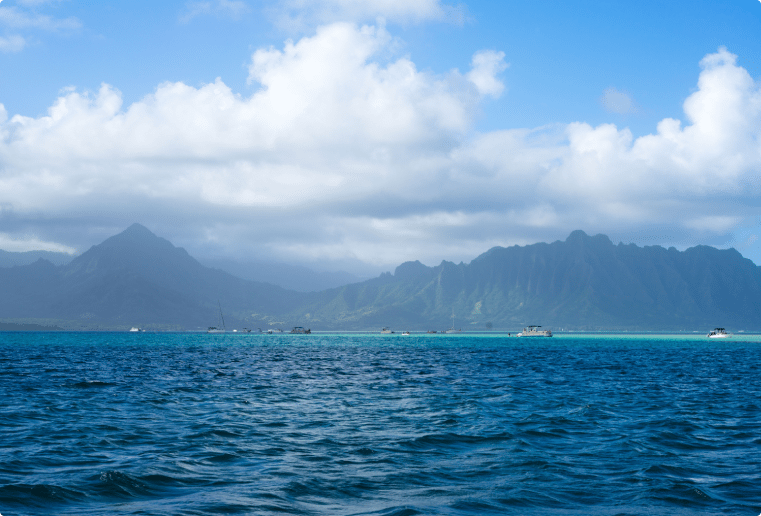 One of the primary objectives for Kualoa is the preservation of its Agriculture and Conservation zoned land. Kualoa Ranch, its owners and employees all work towards this goal of environmental preservation and sustainability by conducting complimentary activities on the 4,000 acre property.

Kualoa has several initiatives in progress including a reef monitoring program, a “free” reef-safe sunscreen dispenser and education program for guests on tours,  a sustainable plastics program and an LED lighting initiative to name a few.

The primary uses for the Ag land to which the company is committed, are livestock production, aquaculture and diversified agriculture. These agrarian land uses have been practiced, uninterrupted, for decades and form the foundation for the company’s diverse outdoor recreation and education operations.

Since financial stability is essential for long-term sustainability, the company has developed and integrated a wide variety of outdoor recreational activities throughout its property, providing guests the opportunity to see the beauty of the undeveloped land, learn about its history and current operations.